Taking your time for the next album is not as easy as it sounds.  As fast-paced as today’s world is, a band that was once highly acclaimed can easily fall into oblivion. Despite this risk, the four members of Gin Ga still stuck to their guns and consistently followed their own path. Although the 2008 debut “They Should Have Told Us” already proved to be a fine piece of music, the successor had to offer a little more in all respects. At least according to the self understanding of the band, which has always avoided uninspired cheap shots like the plague. 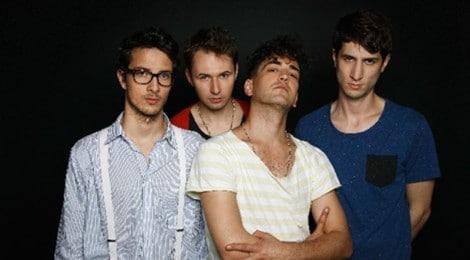 While constantly feeding the curiosity of the public with concerts, singles and videos, the expectations for Gin Ga’s second album of Gin Ga were huge and the pressure, to deliver something more than just solid, tremendous.  As admitted by the members Alex Konrad, Emanuel Donner, Klemens Wihlidal und Matias Meno, this was not an easy task to accomplish, but the result clearly speaks for itself. “Yes/No” (Monkey Music ) has arguably become exactly what a big hit should be and a musical feat that could most probably open the doors to a major international career.

The reason why the new album took more time is definitely not due to a lack of ideas. Listening to the new songs of the album, you can immediately hear that there was most probably an abundance of creative ideas. Alex Konrad, Emanuel Donner, Klemens Wihlidal und Matias Meno avoid any repetition and celebrate the musical diversity, which mainly finds its expression in the fact that not one song ever sounds like the other. It is rather perfectionism that most probably delayed the release of “Yes/No”. As the saying goes, good things take time, and time is what Gin Ga used to prepare each song down to the last detail, without ever sounding too over-ambitious.

The pop of the Viennese band gets its influences from folk (far less than on the first album ), modern singer/songwriting, rock, and more recently also from the synth pop of the 80s and a little new wave and fortunately stays away from all the latest trends and currents. The  frontman Alex Konrad and colleagues quite admirably succeed in impacting their music with a strange indefinable vibe and niveau, that special Gin Ga touch, which is expressed in a captivating excess of tones, sounds, and melodies. Compared to many other indie-pop concepts, their songs ignore banal superficiality and really go deep.

It seems as if Gin Ga wants to set the world on fire with “Yes/No”. It is an album that you can not stop listening to, simply because it offers so much more than you usually get to hear. In the field of local indie pop probably THE album of the year.